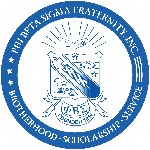 ABOUT US
Phi Beta Sigma Fraternity was founded at Howard University in Washington, D.C., January 9, 1914, by three young African-American male students. The Founders, Honorable A. Langston Taylor, Honorable Leonard F. Morse, and Honorable Charles I. Brown, wanted to organize a Greek letter fraternity that would truly exemplify the ideals of brotherhood, scholarship, and service.